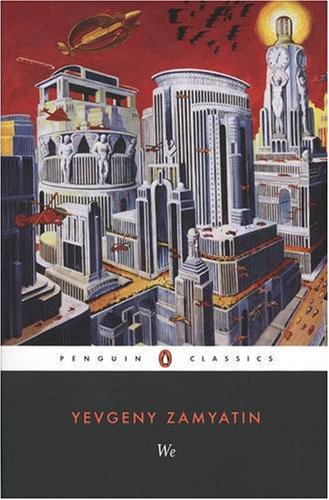 We
Rationality
Inside its glass dome the One State is a place of mathematical precision, a community where everything is everyone's and integrity, clarity and unerrring loyalty reign over all.
D-503, Builder of the Integral, is an honest Cipher, ashamed of the hairy hands that link him to a barbaric ancestry. And yet he is tormented by the figure a-1, that impenetrable x, the legacy that makes him lust, imagine, that's given him a soul.
Consumed by his sickness and obsessed with the mysterious I-330 he escapes outside the Wall, to where the humans are wild and the land is green, and plots to overthrow The Benefactor, and return his civilisation to natural chaos. Only The Operation can return order to the perfect world, and allow reason to win.
We
Infatuation
OneState engineer D-503 gets increasingly infatuated by the beautiful 1-330, though he harbours suspicions. The key to his fate seems to lie in the hands of the mysterious S - but who is S? Will his fascination lead him to love or revolution?
The first great dystopian novel of the 20th century, written in secret in early Soviet Russia by Yevgeni Zamyatin.
D-503 ...... Anton Lesser
R-13 ...... Don Warrington
U ...... Brigit Forsyth
1-330 ...... Joanna Riding
0-90 ...... Julia Rounthwaite
Benefactor ...... Russell Dixon
Tannoy ...... Emma Clarke
Babushka ...... Judith Davis
S ...... Patrick Bridgman
2nd Engineer ...... Paul Viragh
Dramatised in two-parts by Sean O'Brien.
Director: Jim Poyser
First broadcast on BBC Radio 4 in 2004.